Tongue Piercings May Bring Harm to Teeth and Gums 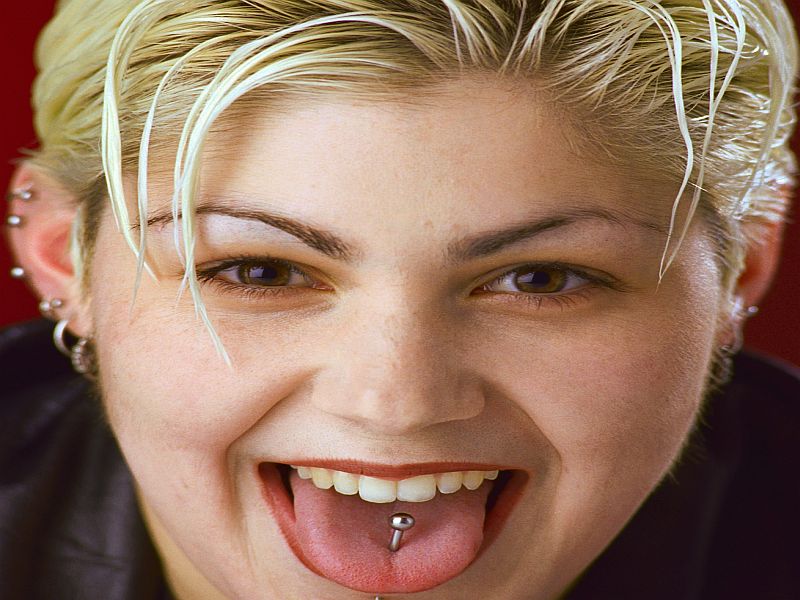 MONDAY, June 25, 2018 (HealthDay News) -- You might think a tongue piercing is sexy and cool, but these hip accessories do your oral health no good at all, researchers say.

People with a tongue piercing appear more likely to suffer from gum disease more often than those with a lip piercing, a Swiss study has concluded.

Researchers found more cases of bleeding, receding or inflamed gums among a group of 14 patients with a tongue piercing, said senior researcher Dr. Clemens Walter, deputy superintendent of the University Center for Dentistry with the University of Basel in Switzerland.

"The closer teeth were to a tongue piercing, the more affected they were," Walter said.

On the other hand, the gum health of seven patients with a lip piercing appeared unaffected by the jewelry, according to findings presented at the just-concluded European Federation of Periodontology's meeting in Amsterdam.

A separate study from Belgium found that two young women (ages 27 and 32) with tongue piercings suffered repeated gum damage due to the pressure of metal against their teeth.

After eight to 10 years, the women had their piercings removed after gum bleeding and infection resulted in repeated abscesses, loose teeth and movement of teeth out of their normal position, researchers said.

"For both patients, time-consuming and costly surgical treatment and antibiotics were needed, and complete regeneration of the lost tissue could not be achieved," Dr. Bernard Loir, a dentist in Brussels, said in a prepared statement. He presented the findings at the same meeting.

Tongue piercings interfere with eating, swallowing and speaking, and cause irritation and damage by constantly rubbing and clicking against the teeth and gums, Walter and Loir said.

"Patients with a tongue piercing always play with the piercing and push the piercing to the teeth, especially the lower front teeth, causing mechanical irritation," Walter said.

"The hard structure hits against the tooth, and that constant tapping causes micro-cracks that eventually become big cracks that cause the tooth structure to fail or the tooth to become very, very sensitive," said Rodriguez, a pediatric dentist in Moses Lake, Wash.

Oral piercings also increase a person's chance of infection, given that the human mouth plays host to more than 500 known types of bacteria, fungi and viruses, Rodriguez added.

"The mouth holds its own fairly well, but we push things in favor of being complicated when we punch a hole in those protective barriers," Rodriguez said. "A lot of the bugs we have in the mouth are considered opportunistic. Whenever we have an injury or lesion, they try to take advantage."

Walter is steadfast that if patients care about their oral health, they will remove their tongue piercing as soon as possible.

"They have to remove it. There's no other choice," Walter said. "According to my data and the cases I have seen, they have to remove, and usually they do it. If you explain it to the patient, he removes the piercing."

Piercers also should refrain from vaping or smoking either tobacco or marijuana, Rodriguez added.

"If you have a piercing and you're bombarding it with all these irritants and potential carcinogens, well, that complicates things," he said.

Research presented at meetings is generally considered preliminary until published in a peer-reviewed journal.

The American Dental Association has more about oral piercings.