Giant Hogweed Can Burn Skin and Eyes, and It’s Spreading 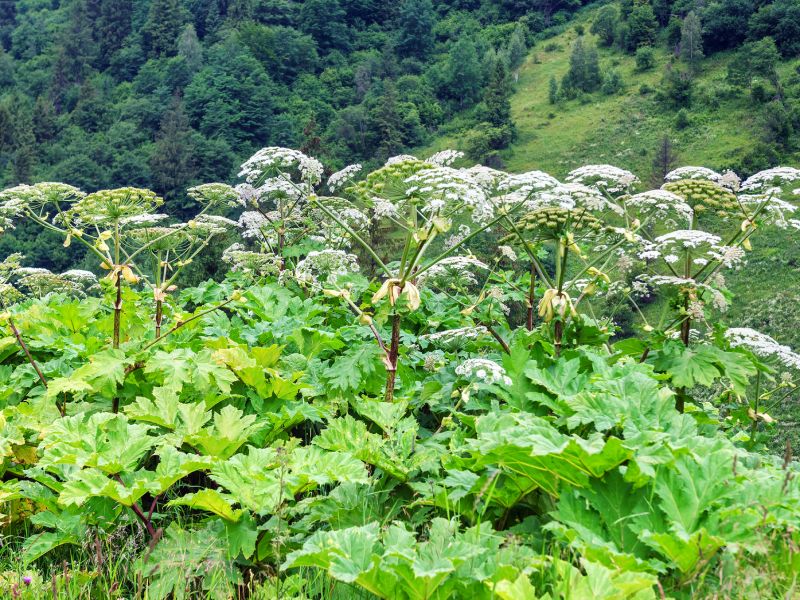 TUESDAY, June 26, 2018 (HealthDay News) -- Giant hogweed is much like a Dr. Seuss nightmare -- a towering, invasive plant with toxic sap that burns the skin and eyes upon contact.

But the noxious weed is not imaginary, with a dozen states now on the lookout to eradicate any patches of giant hogweed that might crop up, experts say.

The plant grows 8 to 14 feet tall, with a green hollow stem rising up to branches of small white flowers clustered in "umbrellas" about 2.5 feet across, said Naja Kraus, a research scientist with the New York State Department of Environmental Conservation.

"If people get sap on their skin, the best thing is to go home and wash up with a lot of soap and water," said Jordan Metzgar, a curator with Virginia Tech's Massey Herbarium in Blacksburg. "Then stay out of the sun or wear sunblock for the last couple of days."

Giant hogweed is federally listed as a noxious weed, Kraus said. It is currently shown as active in 12 states, mainly in New England, the Mid-Atlantic region and the Pacific Northwest.

The weed is native to the Caucasus mountain region of Eurasia, but its massive size and odd appearance led U.S. botanists to import it as an ornamental plant for arboretums and private gardens in the early 1900s, Kraus said.

"It was brought over to be planted in a garden in New York, so it was brought for ornamental reasons," Metzgar said. "Up until 15 or 20 years ago, that was all it was really doing, then it started to spread more in the northeastern U.S."

Brushing up against the plant with bare skin can cause a reaction that begins as soon as 15 minutes after contact. Burns and blisters can occur, particularly if the person exposes the skin to sunlight, Kraus said.

Each plant on average produces 20,000 seeds, which makes controlling its spread a real challenge, Kraus said.

Most seeds fall within 30 feet of the parent plant, but if the plant grows near a stream the seeds will float downstream, she said.

"That becomes a harder job to tackle, because you have to find all the places where the new plants are growing," Kraus said.

Giant hogweed is most prevalent in New York state, Metzgar said. It has been identified there in 49 counties, mainly in central and western New York.

Officials beat back giant hogweed using a method called root cutting, in which they sever the plant root 5 inches below the soil, Kraus said.

However, that's only good for patches with fewer than 400 plants. Herbicides have to be deployed in larger patches, Kraus said.

"That's amazing -- 904 land owners don't have giant hogweed on their property anymore, because we've been controlling it," Kraus said.

People who think they've got giant hogweed on their property should not approach it, Metzgar and Kraus said.

"If you do think you've found it, take a good look at the leaves and stems and flowers, and then refer to a photo online for identification," Metzgar said.

Folks who are sure it's giant hogweed should then take some good photographs and send them to their local extension agent, or environmental officials in your city, county or state, Metzgar and Kraus said.

"It is very controllable," Kraus said. "It's important to report it if you have it, so you can get help."

The New York State Department of Environmental Conservation has more about giant hogweed.