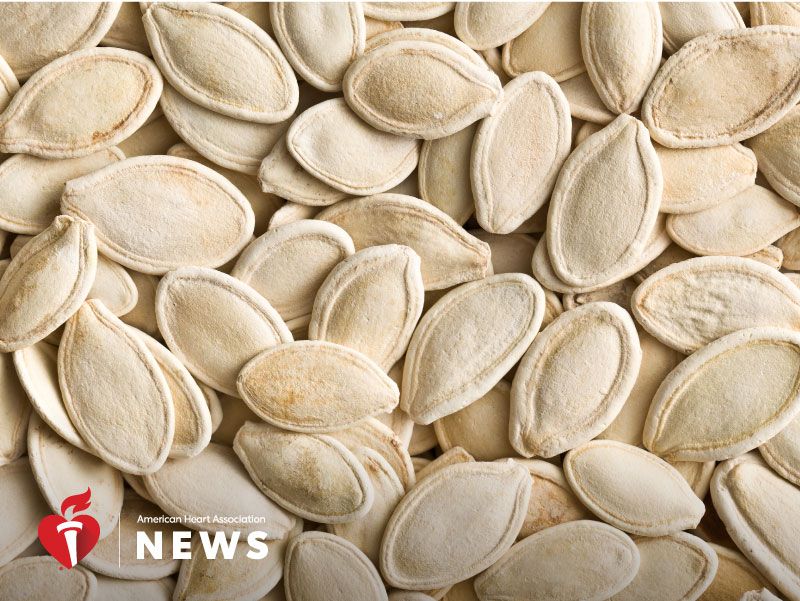 THURSDAY, Oct. 25, 2018 (American Heart Association) -- You can get your hands on pumpkin seeds on about any store's snack aisle, but your healthiest option may be the old-fashioned way: scooping them out of the stringy guts of that jack-o'-lantern you're carving.

That's because store-bought pumpkin seeds -- ever more popular because they're easy to eat and loaded with nutrients -- may be loaded with salt as well. But when they come straight from the source, pumpkin seeds are lower in sodium and have more of the minerals that make them so nutritious, said Judith Wylie-Rosett, a professor and division head for health promotion and nutrition research at New York's Albert Einstein College of Medicine.

Of course, buying whole pumpkins for the seeds isn't exactly economical or practical. But you can and should find the unsalted variety, Wylie-Rosett said.

"We think of savory foods as having that salty flavor," she said. "We're very acculturated to that. If we eat less salt, then we crave less salt, but that takes a lot of work for some people."

Pumpkin seeds, also known as pepitas, can be consumed with or without their shells. Once you've scooped them out of the pumpkin, it's advisable to soak them in water for a few hours to help remove the pulp from the shells. (There's nothing wrong with consuming the fleshy bits that are attached to the shells, but many don't care for the texture.) A common practice is to add light spices and roast the seeds on a cookie sheet on the top rack of the oven for 15 to 20 minutes at 350 degrees.

Eating the shells only adds to the seeds' high fiber content, which has been associated with a reduced risk of heart disease and obesity. Whole, roasted pumpkin seeds in their shells contain about 5.2 grams of fiber per serving, while shelled seeds contain just 1.8 grams.

"There is one caveat to the fiber, though," Wylie-Rosett said. "If somebody has not been eating very much fiber at all, and they then eat a large quantity of pumpkin seeds they may end up with some digestive-tract disturbance."

Pumpkin seeds also are rich in other nutrients, including magnesium, which can aid in heart and bone health, lower blood pressure and even prevent migraines. Just a quarter cup of pumpkin seeds includes 42 percent of a person's recommended daily intake of magnesium, a potentially easy solution for almost half of Americans who don't get enough magnesium in their diets.

"As a mineral, magnesium actually helps with a lot of the somatic (bodily) functions of the body," Wylie-Rosett said. "Historically we ate a lot more magnesium, but as we have processed food, it is processed out and may not be replaced that much."

Other benefits of pumpkin seeds include:

One cautionary note: Pumpkin-spiced everything during the autumn months is not necessarily recommended.

Pumpkin spice itself contains just a couple of calories per serving, but it often shows up with foods and drinks that are not so healthy.

"People come up with methods of overdoing it that I never could think of," Wylie-Rosett said. "So often we don't eat pumpkin as a vegetable. We eat it as an ingredient in a dessert. We treat it as a seasonal item."

Two healthy options for eating pumpkin no matter the season are pumpkin stew and roasted pumpkin, she said. Recipes for those dishes offer a way to consume the flesh of the pumpkin, which is high in carotenoids and fiber and low in fat.