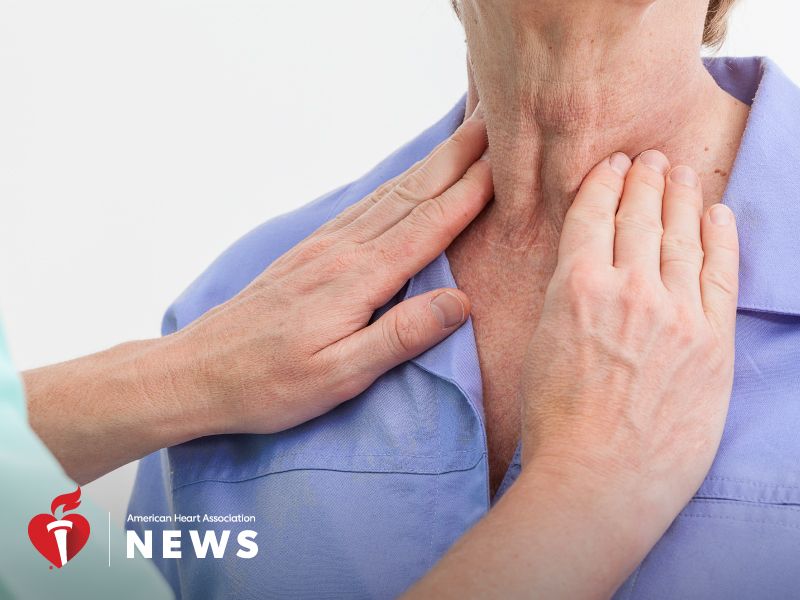 FRIDAY, Dec. 14, 2018 (American Heart Association) -- The thyroid is a tiny powerhouse. The gland, which is located at the base of the neck, releases hormones that control how the entire body uses energy and affects an array of organs throughout the body – including the heart.

The findings "suggest there are groups of people who might benefit from thyroid treatment who aren't getting treated right now," said Dr. Anne Cappola, an endocrinologist at the Perelman School of Medicine at the University of Pennsylvania in Philadelphia and senior author of the study, published Friday in the American Heart Association journal Circulation: Heart Failure.

Subclinical hypothyroidism is a mild form of hypothyroidism, or underactive thyroid. Both it and low T3 syndrome occur when the body doesn't produce enough of certain hormones.

But, if doctors were able to completely reverse abnormal thyroid levels in patients who already have heart failure, "perhaps their heart failure would be less severe," Cappola said.

Researchers analyzed data collected on 1,365 patients with heart failure – mostly white men who were 57 years old, on average – enrolled between 2003 and 2011 in the Penn Heart Failure Study. Most of the participants did not have severe heart failure

Researchers tested the thyroid hormones in blood samples provided by participants at the start of the study. Most had normal thyroid hormone levels, but 5 percent had subclinical hypothyroidism and 14 percent had low T3 syndrome.

After about four years, compared with heart failure patients whose thyroids functioned normally, those with subclinical hypothyroidism or low T3 syndrome were more likely to need a mechanical pump that supports heart function and blood flow (a ventricular assist device) or a heart transplant. They also had a higher risk of death.

Dr. Mark Drazner, clinical chief of cardiology at UT Southwestern Medical Center in Dallas, said it's too soon to say whether treating thyroid abnormalities at the levels studied would help heart failure patients improve. He believes clinical trials are needed.

"It's a pretty big leap to take that step," said Drazner, who was not involved in the study.

Even so, he said it's important for people to be aware of the connection between the thyroid and heart health.