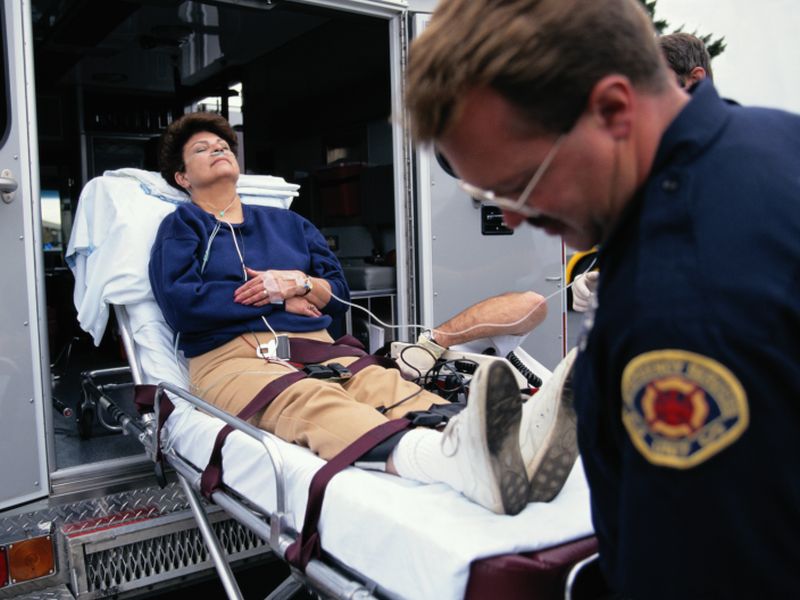 MONDAY, Dec. 17, 2018 (HealthDay News) -- Women who call 911 for a possible heart attack may get different treatment from paramedics than men do, a new U.S. study suggests.

Researchers found that ambulance crews were less likely to give recommended treatments, such as aspirin, to women with chest pain. Paramedics were also less likely to turn on their sirens while transporting female patients to the hospital.

The reasons for the disparities aren't clear, the study authors said.

But one possibility is that paramedics are less likely to attribute women's chest pain to a heart attack, said senior researcher Melissa McCarthy.

"That could definitely be a factor," said McCarthy, a professor of health policy and emergency medicine at George Washington University, in Washington, D.C.

The findings align with what past studies have shown about heart attack care: Women are less likely than men to get certain recommended treatments in the hospital, and after they're discharged.

In fact, differences emerge even before medical professionals are involved. A study published this week found that women with heart attack symptoms often delay calling for help -- waiting more than a half-hour longer than men, on average.

But much less has been known about what happens right after that 911 call -- when paramedics arrive on the scene, according to McCarthy.

That's in large part because there are so many independent emergency medical service (EMS) systems across the United States, she explained.

For the new study, McCarthy's team turned to a relatively new national database that has been pulling together data from those EMS systems. The investigators focused on responses to 2.4 million 911 calls for chest pain between 2010 and 2013.

Overall, paramedics gave recommended therapies and procedures less than half the time, the findings showed. And women were even less likely to receive them.

Aspirin was a case in point. The drug can help minimize clotting in the arteries during a possible heart attack. But for every 100 EMS responses to women suffering chest pain, 2.8 fewer received aspirin, versus men.

There are legitimate reasons why paramedics would not give aspirin, according to McCarthy.

"Some people may have already taken an aspirin on their own," she said. "Some may be on daily aspirin. Some may be allergic to it."

But it's not clear why aspirin use would be lower in women, according to McCarthy. The study also picked up another puzzling discrepancy: One-third of men were taken to the hospital with lights flashing and sirens on; that compared with less than 29 percent of women.

Dr. Suzanne Steinbaum, a spokesperson for the American Heart Association (AHA), stressed that chest pain in women should be taken just as seriously as it is in men.

Cardiovascular disease is the top killer of U.S. women, according to the AHA -- accounting for one in three deaths.

Yet, studies show, there is a persistent myth that heart disease is more of a "man's disease."

Steinbaum recommended that women, and their family members, be direct with EMS.

"Use the language. Say 'I have chest pain. I'm short of breath. I'm concerned that it's my heart,' " said Steinbaum, who also direct women's cardiovascular prevention, health and wellness at Mount Sinai Hospital in New York City.

Beyond that, she recommended learning the "atypical" symptoms of heart attack -- which are more common in women than men. They include pain in the back, neck, jaw or stomach; breathing difficulty; and nausea, lightheadedness or a cold sweat.

Steinbaum also suggested having aspirin on hand. If possible heart attack symptoms strike, she said, chew an aspirin while someone calls 911.

McCarthy's team also looked at EMS responses to cardiac arrest -- where the heart suddenly stops beating normally. Cardiac arrest differs from a heart attack, and it's fatal within minutes without emergency help.

In nearly all responses to cardiac arrest, paramedics made some kind of resuscitation effort.

But fewer women received defibrillation -- where a portable device is used to try to "shock" the heart into a normal rhythm. About 23 percent of women were defibrillated, versus 32 percent of men.

McCarthy cited a "big caveat" about that finding, however: Only certain heart rhythm disturbances are "shock-able," and studies have shown that they are less common in women than men.

The findings were published Dec. 11 in the journal Women's Health Issues.

The American Heart Association's Go Red For Women campaign has more on women and heart disease.