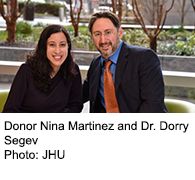 THURSDAY, March 28, 2019 (HealthDay News) -- Surgeons in Baltimore have performed the world's first kidney transplant in which both the living donor and the recipient are HIV-positive.

The success of the operation could potentially make organs more widely available to patients infected with the AIDS virus.

A 35-year-old Atlanta woman who contracted HIV as a newborn offered one of her kidneys to an HIV-positive stranger, and doctors at Johns Hopkins University School of Medicine performed the procedure on Monday.

Nina Martinez initially had wanted to donate her kidney to a friend, but the friend passed away last fall, hospital officials said.

Nevertheless, she decided that she still wanted to make the donation, partially to help clear away some of the stigma surrounding people with HIV/AIDS.

"Somebody was waiting for a kidney who needed that kidney, and even though my kidney has HIV, this kidney saved their lives," she added.

Martinez contracted HIV through a blood transfusion when she was just 6 weeks old, Johns Hopkins said. Doctors diagnosed her with the virus in the early 1990s.

Johns Hopkins surgeon Dr. Dorry Segev hailed the procedure as "unbelievably exciting" for HIV patients whose kidneys are in danger of shutting down.

"We saw there were people on the transplant list who had HIV who were dying, and at the same time we were unable to use organs from donors who had HIV," Segev explained during the media briefing.

That's because U.S. doctors were prevented by law until six years ago from using organs harvested from HIV-positive donors, even if they would be used to save the lives of HIV-positive patients.

The HIV Organ Policy Equity (HOPE) Act of 2013 lifted the 25-year-old ban and gave the Johns Hopkins surgeons the legal authority to perform Monday's transplant, which also was greenlit by the United Network for Organ Sharing (UNOS), the group that oversees the U.S. transplant system.

Approximately 113,000 people are on a waiting list for an organ, according to UNOS statistics. Nearly three of every five transplants involve a kidney.

In a statement, Segev estimated that between 500 and 600 HIV-positive people who wanted to be organ donors will die each year. Their organs could have saved more than 1,000 people if the medical community used the organs for transplant.

"Organ transplantation is critical for patients with HIV, who die on the waiting list even faster than their HIV-negative counterparts," Segev said in a statement. "We are very thankful to Congress, the president and the entire transplant community for letting us use organs from HIV-positive patients to save lives instead of throwing them away, as we had to do for so many years."

Over the past few years, the United States has started to transplant organs from deceased HIV-positive donors, as part of a research study, according to UNOS. Since 2016, 116 kidney and liver transplants from deceased donors have been performed, the AP reported.

Doctors have been concerned about taking kidneys from living donors with HIV, fearing that the person's generosity might backfire if their remaining kidney suffered damage either from the virus or the medications that keep HIV at bay.

"The medical side of a living donor transplant is we want to make sure that the donor remains healthy for the rest of their life and can live their long and healthy life with only one kidney," Segev explained.

But newer HIV medications are safer and more effective, making the risks associated with these sorts of live donor transplants comparable between people with or without the virus, he added in a statement.

In a statement, UNOS called the new transplant "a positive milestone in the HOPE process. All of these transplants are part of a research endeavor that is being monitored closely for donor and recipient safety."

The United Network for Organ Sharing has more about transplant statistics.