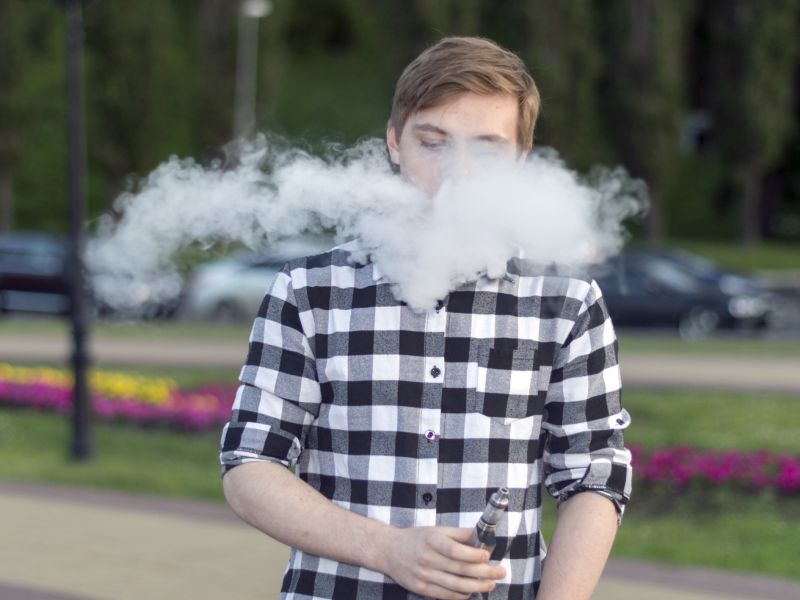 WEDNESDAY, April 3, 2019 (HealthDay News) -- The U.S. Food and Drug Administration warned on Tuesday that there have been reports of teens experiencing seizures after they vape.

"Seizures or convulsions are known potential side effects of nicotine poisoning and have been reported in scientific literature in relation to intentional or accidental swallowing of nicotine-containing e-liquids," FDA Commissioner Dr. Scott Gottlieb said in an agency news release. Now, an agency review has unearthed 35 reported cases of seizures following the use of e-cigarettes between 2010 and early 2019.

"While 35 cases may not seem like much compared to the total number of people using e-cigarettes, we are nonetheless concerned by these reported cases," Gottlieb added. "We also recognize that not all of the cases may be reported. We believe these 35 cases warrant scientific investigation into whether there is in fact a connection."

Gottlieb stressed that health officials don't yet know for sure that vaping can trigger seizures, but "we're sharing this early information with the public because as a public health agency, it's our job to communicate about potential safety concerns associated with the products we regulate…."

With the 35 seizure cases, there is no clear pattern, Gottlieb noted.

"For example, seizures have been reported among first-time e-cigarette users and experienced users," he said. "In a few situations, e-cigarette users reported a prior history of seizure diagnosis. A few reported cases indicated that the seizures occurred in association with the use of other substances such as marijuana or amphetamines. Seizures have been reported as occurring after a few puffs or up to one day after use."

One tobacco expert said the link is worth investigating.

"Research demonstrates that high concentrations of nicotine can cause significant health effects, including seizures," said Andrea Spatarella, a doctor of nursing practice from the Center for Tobacco Control at Northwell Health, in Great Neck, N.Y.

"The user of the vaping device may be unaware or mislead about the actual concentration of nicotine, putting them at potential risk," she said.

"Further investigation about a possible connection between nicotine overdosing from vaping devices and the development of seizures may provide additional clarity about the safety of these devices," Spatarella added.

A neurologist said physicians will now be alert for this potential vaping danger.

When someone has a seizure, "the medical community will ask about triggers," said Dr. Derek Chong, who helps direct neurology at Lenox Hill Hospital in New York City. The new FDA warning "will result in the medical community now adding e-cigarettes and what was in them, and how much was used, to that list of things we will specifically ask about when assessing someone who has had a seizure," he said.

This isn't the first health concern tied to e-cigarettes. Issues around lung health have already been raised about the chemicals in the vapor that are inhaled while using e-cigarettes, Gottlieb noted. And research published in January suggested that vaping may raise the risk of heart attacks and strokes.

For the past two years, the FDA has been trying to stem huge spikes in vaping among teens.

Just last month, the agency announced it would go ahead with efforts to restrict sales of some types of flavored vaping products to minors.

Under the new rules, most forms of flavored e-cigarettes would only be sold in stores that verify a customer's age when he or she enters the store, or the store should have a special age-restricted area set aside for vaping products. Companies that fail to comply could see their products pulled from the market, the agency said at the time.

"We know that nicotine isn't a harmless substance, especially in the developing brains of our youth," Gottlieb said Tuesday. "We know that initiation to, and addiction to, nicotine by never-smokers -- predominantly youth and young adults -- raises public health concerns. These risks are among the many reasons why we so strongly believe that no child should be using any tobacco product."

The FDA encouraged the public to report cases of people who have used e-cigarettes and have had a seizure by going to the FDA website.

For more on electronic cigarette use among youth, visit the U.S. National Institute on Drug Abuse.