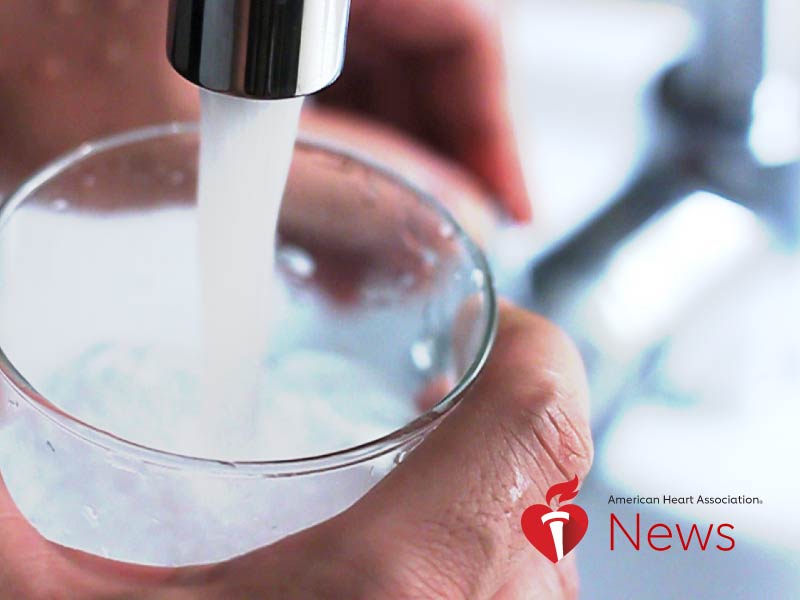 TUESDAY, May 7, 2019 (American Heart Association News) -- If you have high blood pressure, chances are you've been told to cut back on salt. You might even be taking medication. These are good strategies, as nearly half of all adults in the United States work to keep hypertension at bay.

What if there were an easier way to make sure nearly everyone took at least one small step toward reducing their blood pressure -- every time they drank a glass of water?

A new study, published Tuesday in the Journal of the American Heart Association, suggests adding calcium and magnesium to drinking water potentially could help lower blood pressure levels across the population. The strategy stems from research that looked at the impact of drinking water sources on the health of people in an area of coastal Bangladesh affected by seawater intrusion. The residents relied upon pond water or groundwater as their main water source.

"Calcium and magnesium are protective; they decrease blood pressure," said Abu Mohammed Naser, a postdoctoral fellow at Emory University's Rollins School of Public Health in Atlanta and lead author of the study. "What we suspect is happening is that they outweigh the harmful effects of sodium on blood pressure."

But the findings also could have implications for any population struggling to reduce hypertension, which is the leading preventable cause of premature death worldwide, affecting more than 1.3 billion people globally and 116.4 million Americans.

The analysis pooled data from two studies following participants in several communities in coastal Bangladesh, during both dry and monsoon seasons when the amount of salinity in the water fluctuated.

By testing urine samples, researchers determined those with lower blood pressure also had higher levels of calcium and magnesium in their system, which they attributed to drinking the salinated water.

The reduction in blood pressure was small but significant, and worthy of further exploration, said Dr. Robert M. Carey, a professor of medicine at the University of Virginia who wasn't involved in the new study. He helped write the most recent blood pressure guidelines for the American Heart Association and the American College of Cardiology.

"I think it's pretty clear from many different studies that a small reduction in blood pressure, done consistently, can have a major impact in reducing cardiovascular disease and stroke," he said.

Carey cautioned the Bangladesh results would need to be replicated in a clinical setting to confirm that drinking water fortified with calcium and magnesium was instrumental in lowering blood pressure.

If those results are confirmed, "you would be able to impact blood pressure levels in the average population," he said. "That's different from the approach we have taken historically, where we wait until someone becomes hypertensive and then we introduce lifestyle modifications, and then add drug therapy to help individuals lower their blood pressure. I think we need to do both."

Numerous studies have shown both calcium and magnesium are important for maintaining good blood pressure. The use of vitamin and mineral supplements to prevent chronic diseases is not recommended, according to the Academy of Nutrition and Dietetics. In fact, the AHA recommends people get their vitamins and minerals directly from a nutrition-packed diet.

But most Americans fail to get the recommended daily allowance through the foods they eat.

Naser said this is partly because people aren't eating enough foods rich in these minerals. But he also attributes it to lower levels of nutrients overall in the soil from over-farming and climate change-influenced rainfall patterns.

Adding these minerals to drinking water could be an effective way of counteracting some of that, Naser said. And water also could make a better delivery system for some minerals than food because "chemicals in the food can interfere with absorption. Bioavailability is low. If you can supplement or add calcium and magnesium to water, there is a high chance that they will be absorbed better."