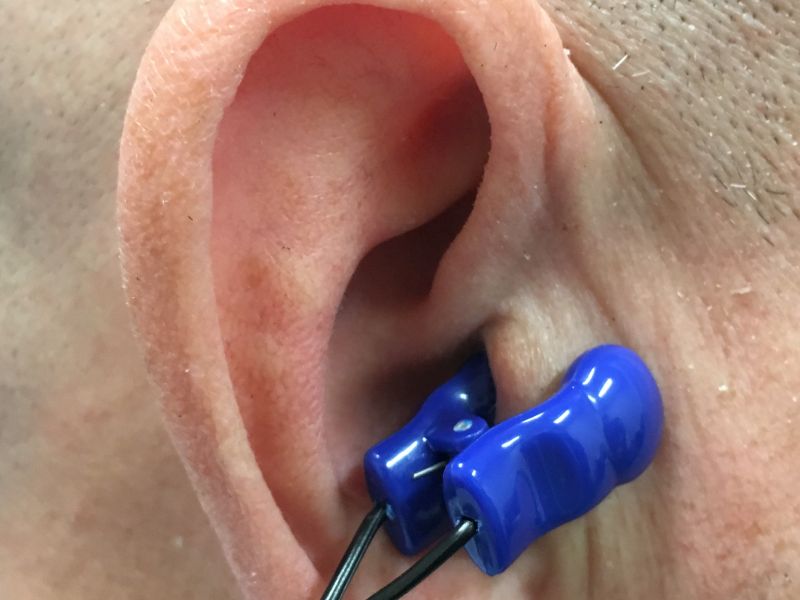 THURSDAY, May 9, 2019 (HealthDay News) -- Imagine if all it took to treat the heart condition atrial fibrillation was clipping a small device to your ear for an hour a day? That futuristic scenario could soon be a reality, according to a new study.

In a small, early trial, the researchers found the device -- which emits a mild electric current -- appears to be effective at controlling atrial fibrillation (a-fib) and was well-tolerated by patients.

"This was the first human study [on this treatment]. The research is still in its early phases, but the results are promising and warrant further studies," said lead author Dr. Stavros Stavrakis. He's an associate professor at the University of Oklahoma Health Sciences Center in Oklahoma City.

A-fib affects more than 33.5 million people worldwide. The heart rhythm disorder causes the upper chambers in your heart to quiver at times. That can cause blood to pool and possibly clot. When the heart starts beating normally again, the clot may get pushed into the bloodstream where it can travel to the brain and cause a stroke, according to the American Heart Association (AHA).

Treatment includes lifestyle changes and medications to control the heart rate and rhythm and prevent blood clots. Sometimes, procedures such as ablation (which destroys malfunctioning tissue) or surgery to implant a pacemaker are necessary to control a-fib, the AHA says.

Stavrakis and his team hoped to find a less invasive option, with fewer side effects.

The device is essentially a TENS (transcutaneous electrical nerve stimulation) unit with an ear clip. TENS, a battery-operated device that delivers electrical impulses through electodes, has been used to help control pain by overriding pain signals in nerves, according to the Arthritis Foundation. The TENS unit with the ear clip was initially designed to treat tinnitus, a condition that causes ringing in the ear.

Stavrakis said he thinks this treatment is probably best for patients in the early stages of a-fib, though that hasn't yet been tested.

Both groups wore an ear clip attached to the TENS unit for an hour daily for six months. This was done at home, often while the patients did something else, like watching TV.

Heart rates were measured for two weeks continuously at the start of the study, at three months and again at six months.

Stavrakis said the researchers didn't change any medications that people were on. About half were on drugs to control their heart rhythm, which he said was considered an add-on therapy.

Dr. John Osborne, a spokesperson for the American Heart Association, reviewed the study and said, "I'm very intrigued by the potential of this treatment. It was easy, simple and probably very well-tolerated. It seems like it would be pretty inexpensive, too."

He said the drugs for treating a-fib have side effects that can be intolerable to some, and procedures for the condition tend to be invasive. "There's a huge opportunity for other strategies to control a-fib," he noted.

Osborne did point out the study's limitations -- patients came only from a single medical center and the study was quite small. Still, he said the findings were impressive, and more study needs to be done.

Findings from the study are scheduled to be presented on Thursday at the Heart Rhythm Society meeting, in San Francisco. Research presented at meetings is typically viewed as preliminary until it's been published in a peer-reviewed journal.

The Heart Rhythm Society has more about atrial fibrillation.