AHA News: This May Be Why Slashing Salt Lowers Blood Pressure 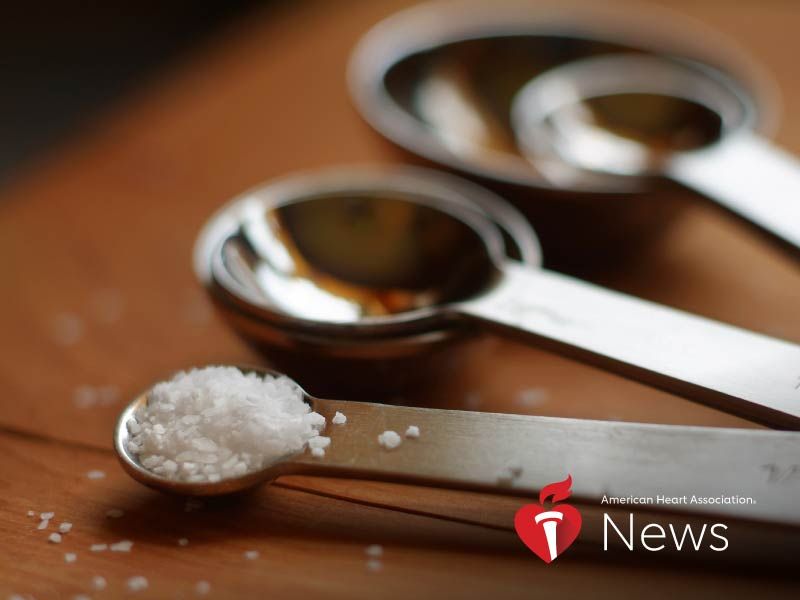 MONDAY, May 13, 2019 (American Heart Association News) -- Slash sodium from your diet. That's the advice inevitably given to everyone.

Restricting sodium intake has been key to reducing blood pressure. Now researchers may have found an underlying mechanism to explain why.

Scientists examined hundreds of metabolites substances produced during digestion from blood samples drawn in a study among 64 black British residents with high blood pressure, or hypertension. All participants were instructed to follow a reduced-sodium diet, but otherwise none were taking medication or receiving treatment for their condition.

The study taps into the science of metabolomics, which examines how tiny molecules react to changes in their environment. In this case, the sodium levels altered the setting.

While everyone in the study was put on a low-sodium diet, half were given a slow-release sodium tablet for six weeks. The others received placebos. Researchers then switched the pills for an additional six weeks.

Researchers examined the metabolites in blood samples to see which ones changed along with modification of sodium, she said.

They found that reduction of sodium intake resulted in the increase of two specific types of metabolites -- beta-hydroxyisovalerate and methionine sulfone -- along with a modest drop in blood pressure.

"The changes may represent some underlying biological pathway involved in this sodium regulation," said Zhu, an associate professor in the Department of Population Health Sciences at Medical College of Georgia at Augusta University.

The results were based on a sodium reduction of about 1,120 milligrams a day, from 3,800 mg to 2,680. That decline was associated with a decrease in both systolic blood pressure (the top number in a measurement) and diastolic pressure (the bottom number).

The AHA recommends less than 2,300 mg of sodium a day the equivalent of about 1 teaspoon of salt and ideally, no more than 1,500 mg per day for most adults. On average, Americans consume more than 3,400 mg of sodium each day.

Zhu said additional research would need to validate the study's results because of its small sample size. But she hopes further studies will lead to development of a drug that targets pathways altered by sodium intake levels.

The study focused on the black population "and the emphasis is highly warranted due to a higher prevalence of salt-sensitive hypertension in this group," said Casey Rebholz, an assistant professor in the epidemiology department of Johns Hopkins Bloomberg School of Public Health in Baltimore.

Rebholz pointed out that the landmark study Dietary Approaches to Stop Hypertension-Sodium showed a low-sodium diet was particularly effective in reducing blood pressure among black participants and among those with high blood pressure.

"That's an important group of people to continue studying," she said.

Rebholz said the new research backs up the standard advice doctors give many patients.

"It tells people that modifying and improving their diet, specifically by consuming less sodium, is important for reducing blood pressure."