Need Emergency Air Lift to Hospital? It Could Cost You $40,000 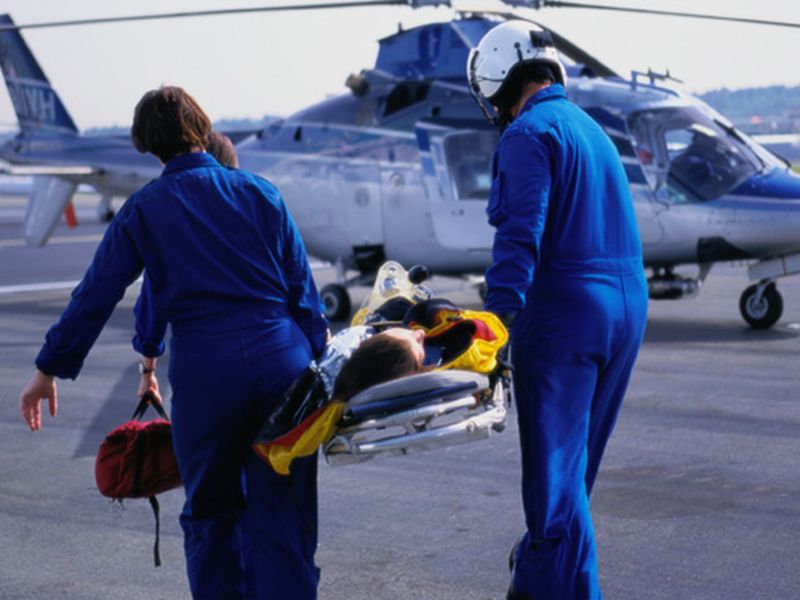 TUESDAY, July 2, 2019 (HealthDay News) -- An air ambulance might be your only chance to survive a medical emergency -- but a new study reports it's going to cost you.

That amount is "more than half of the household income for the average American family in 2016," said lead researcher Ge Bai. She is an associate professor of health policy and management at the Johns Hopkins Bloomberg School of Public Health in Baltimore.

It's also much more than the median $10,000 it typically costs the company to conduct a helicopter air ambulance flight, said the Association of Air Medical Services (AAMS).

Why then the big hike in price when a patient or insurer is presented with the bill?

The new research found that helicopter air ambulances tend to charge fees that are five times the base Medicare reimbursement rate, and mileage rates that are seven times the Medicare rate.

Meanwhile, ambulances that use planes or jets charged initial fees that are four times higher and mileage rates nearly 10 times higher than the Medicare rates.

It's much cheaper to head to the ER by road -- in comparison, ground ambulances charged fees that are 1.5 to three times higher than the Medicare rate, the researchers reported.

It can happen to you

Needing air ambulance transport might sound like a rare event that couldn't happen to you, but more than 85 million Americans live in rural locales where a helicopter is their only chance of reaching a trauma center within an hour or less, according to the AAMS.

This is a prime example of "surprise billing," since most of these air ambulances are not covered in-network by a person's insurance, said Shawn Gremminger, senior director of federal relations at Families USA, a health consumer advocacy group.

"Surprise billing is one of those things that has been recognized by at least some consumer advocates that there's a real problem here," said Gremminger, who noted that such surprises usually spring up in a hospital's emergency services, where a life is on the line and the options are limited.

In one recent case, 35-year-old radiologist Dr. Naveed Khan rolled an ATV while scooting along the Red River in Texas, according to Kaiser Health News. His left arm was mangled, and the hospital at Wichita Falls decided he needed immediate helicopter transport to a trauma center in Fort Worth if there was any chance of saving the arm.

"Because of the vast underpayments by Medicare and Medicaid, and in order to preserve the ability of air medical services to provide access to critical levels of health care for millions of Americans, rates are raised to cover the losses incurred by providing services to Medicare, Medicaid and uninsured patients," the AAMS continued. "More than 70% of helicopter air ambulance patients are covered by Medicare, Medicaid or are uninsured."

Khan told Kaiser Health News he was frustrated to learn that the price charged to him was far more than the actual cost of his flight.

"It's unfair," he said. "It's random, it's arbitrary. It's whatever price they want to set. And to put that onto a person who's already been through what I've been through, I hate to say it, but it's cruel."

The investigators found that helicopters provided about 85% of air ambulance trips for Medicare patients in 2016.

Reasons for soaring costs are murky

One problem is that no one is sure what's behind the prices charged by the transport services, Bai said.

"They are not required to justify their charge," Bai said of air ambulance providers. "Their charge is purely within their discretion. There are no regulatory forces to say you have to charge based on your cost."

The AAMS said that the "first step in any solution to helicopter air ambulance sustainability is cost transparency."

"Without knowing the costs for providing the service, how can government insurance programs like Medicare or Medicaid hope to provide adequate reimbursement for their beneficiaries?" the association said. "A formal cost reporting structure should be put in place, followed by Medicare rebasing their rates on the actual costs of providing lifesaving emergency medical care."

"If the air ambulance is not in your network, they would not be able to bill the patient directly," Gremminger said. "They could bill your insurer, and that insurer would have to pay the average in-network rate for air ambulance services in that geographical area."

The new study was published July 1 in the journal Health Affairs.

The Association of Air Medical Services has more about air ambulance transport costs.