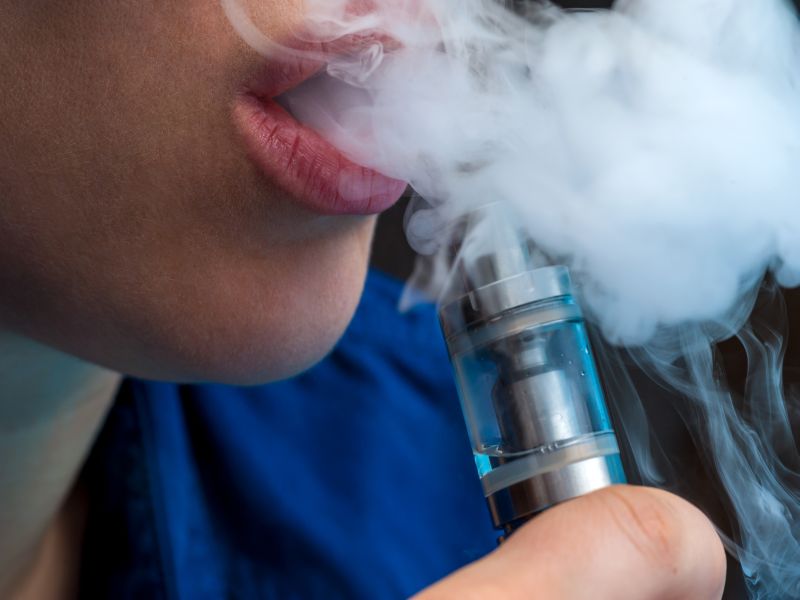 WEDNESDAY, Oct. 2, 2019 (HealthDay News) -- As the number of cases and deaths tied to vaping-linked lung injury continues to rise across the United States, a meticulous examination of 17 such cases suggests a possible culprit.

All of the patients examined had severe forms of the illness, and two had died.

"Based on what we have seen in our study, we suspect that most cases involve chemical contaminants, toxic byproducts or other noxious agents within vape liquids," said lead researcher Dr. Brandon Larsen. He's a surgical pathologist at the Mayo Clinic Arizona in Scottsdale.

Larsen and his team published their findings Oct. 2 in The New England Journal of Medicine.

So far, at least 16 deaths have been reported among the more than 800 cases of lung injury linked to using electronic cigarettes across the United States.

Illnesses affecting people who vape can be sudden and severe. Symptoms include cough, shortness of breath and chest pains. Some patients have had so much trouble breathing that they wind up on oxygen, and in extreme cases are placed on a mechanical ventilator.

A number of potential causes for the lung injuries have been suggested. In a news briefing held Friday, Dr. Anne Schuchat, principal deputy director of the U.S. Centers for Disease Control and Prevention, noted that in about 77% of cases, people had vaped products containing THC, the chemical in marijuana that makes people high.

Earlier in the investigation, another substance, vitamin E acetate -- an oil sometimes used in vaping products -- had also been suspected.

But when the Mayo team looked at lung biopsies from 17 patients with the vaping-linked illness, they did not find evidence to support the vitamin E oil theory.

"While we can't discount the potential role of lipids [oil], we have not seen anything to suggest this is a problem caused by lipid accumulation in the lungs," Larsen said in a clinic news release. "Instead, it seems to be some kind of direct chemical injury, similar to what one might see with exposures to toxic chemical fumes, poisonous gases and toxic agents."

Which fumes might be most implicated still remains unclear, however.

Whatever the cause, "our study offers the first detailed review of the abnormalities that may be seen in lung biopsies, to help clinicians and pathologists make a diagnosis in an appropriate clinical context," Larsen said.

His team noted that most (71%) of the patients whose lungs were biopsied had vaped with marijuana or cannabis oils.

Right now, the CDC is advising that people stop vaping, and Larsen agreed with that advice.

"Everyone should recognize that vaping is not without potential risks, including life-threatening risks, and I think our research supports that," he said. "It would seem prudent based on our observations to explore ways to better regulate the industry and better educate the public, especially our youth, about the risks associated with vaping."

Americans may soon be finding it tougher to vape anyway, as legislators move to ban e-cigarettes. On the national level, the situation has spurred the Trump administration to call for a ban on flavored e-cigarettes.

And on Wednesday, Los Angeles County banned flavored forms of e-cigarettes -- echoing a move made recently by Michigan and the state of New York. Ohio Gov. Mike DeWine called for similar legislation in his state on Wednesday, and last week retail giant Walmart announced that it would pull all e-cigarette products from its shelves.