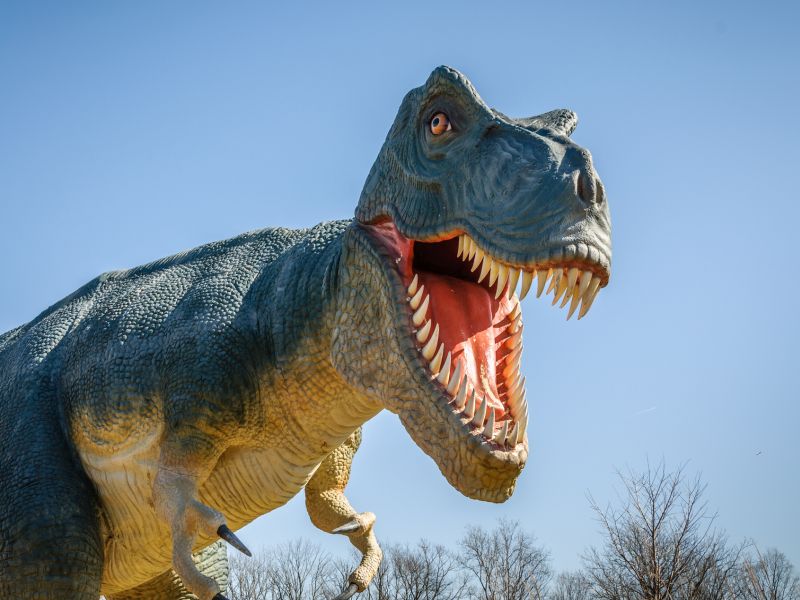 "Small dinosaurs could have just run into the shade to cool off, but for those giant dinosaurs, the potential for overheating was literally inescapable," said study co-author Lawrence Witmer, a professor of anatomy at Ohio University in Athens, Ohio. "They must have had special mechanisms to control brain temperature, but what were they?"

The answer was found in everyday experience: Air-conditioners use evaporation, and it's the evaporative cooling of sweat that keeps people comfortable in summer. So, not surprisingly, when researchers examined modern-day relatives of dinosaurs -- birds and reptiles -- they found that evaporation of moisture in the nose, mouth and eyes cooled blood on its way to the brain.

Lead author Ruger Porter, an assistant professor of anatomical instruction, said, "The handy thing about blood vessels is that they basically write their presence into the bones. The bony canals and grooves that we see in modern-day birds and reptiles are our link to the dinosaur fossils. We can use this bony evidence to restore the patterns of blood flow in extinct dinosaurs and hopefully get a glimpse into their thermal physiology and how they dealt with heat."

The study was published Oct. 16 in the journal Anatomical Record.

"Using a combination of technological innovation and biological expertise, these researchers were able to take a direct reading from the fossil record that provides new clues about how dinosaur skeletal form and function evolved," she said.

The American Museum of Natural History has more on dinosaurs.